What is IP Address?

An Internet Protocol address (IP address) is a logical numeric address that is assigned to every single computer, printer, switch, router or any other device that is part of a TCP/IP-based network.

The IP address is the core component on which the networking architecture is built; no network exists without it. An IP address is a logical address that is used to uniquely identify every node in the network. Because IP addresses are logical, they can change. They are similar to addresses in a town or city because the IP address gives the network node an address so that it can communicate with other nodes or networks, just like mail is sent to friends and relatives.

The numerals in an IP address are divided into 2 parts:

An IP address is the most significant and important component in the networking phenomena that binds the World Wide Web together. The IP address is a numeric address assigned to every unique instance that is connected to any computer communication network using the TCP/IP communication protocols.

IP addressing supports five different address classes: A, B, C, D and E. Only classes A, Band C are available for commercial use.

We can find the class of an address when given the address in binary notation or dotted decimal notation.

• If the address is given in binary notation, the first few bits can tell us the class of the address.

• If the address is given in dotted decimal notation, the first byte defines the class.

1. Class A addresses are designed for large organizations with a large number of hosts or routers.

2. In this the first octet of the address identifies the network and the next three octets are used to identify the host.

3. The first bit of first octet is always 0 and the remaining 7 bits are used to identify the network address.

4. The next three octets i.e. 24 bits are used to identify the host.

9. A block in class A is too large for almost any organization. This means most of the addresses in class A are wasted and are not used.

1. The class B addresses are designed for medium sized organizations with tens of thousands of attached hosts or routers.

4. The third and fourth octet i.e. 6 bits are used to identify the host.

1. The class C addresses is designed for small organizations with a small number of attached hosts or routers.

2. In class C, the first three octets of address are used for network and the last octet is used to identify the host.

8. The class C addresses are too less for many organizations as it supports only 254 hosts in a network.

2. The concept of division of octets into network id and host id does not apply to class D.

1. The Class E address are reserved for future use and are experimental.

2. The concept of network id and hostid does not apply on class E also.

• The fast growth of Internet led to the near depletion of the available addresses.

• We have run out of class A and B addresses, and a class C block is too small for most midsize organizations.

• To overcome the problem of address depletion and give more organizations access to internet, classless addressing was designed and implemented.

• In this scheme, there are no classes, but the addresses are still granted in blocks.

• In classless addressing, when an entity, small or large, needs to be connected to Internet, it is granted a block or range of addresses.

• To simplify the handling of addresses, the Internet authorities impose three restrictions on classless address blocks:

1. The addresses in a block must be contiguous, one after the other.

3. The first address must be evenly divisible by the number of address.

Network address – It identifies a network on internet.  Using this, we can find range of addresses in the network and total possible number of hosts in the network.

Mask – It is a 32-bit binary number that gives the network address in the address block when AND operation is bitwise applied on the mask and any IP address of the block.

The default mask in different classes are :

Subnetting:  Dividing a large block of addresses into several contiguous sub-blocks and assigning these sub-blocks to different smaller networks is called subnetting. It is a practice that is widely used when classless addressing is done.

Some values calculated in subnetting :

1. Number of subnets : Given bits for mask – No. of bits in default mask

2. Subnet address : AND result of subnet mask and the given IP address

3. Broadcast address : By putting the host bits as 1 and retaining the network bits as in the IP address

5. First Host ID : Subnet address + 1 (adding one to the binary representation of the subnet address)

CIDR stands for Classless Inter-Domain Routing and is used for IP addressing and routing. It allocates IP addresses in a more flexible manner as compared to the original system of Internet Protocol (IP) address classes. In this way, it increases the number of available IP addresses with extensive use of NAT (Network Address Translation)

By providing a new, more efficient way to allocate network addresses, CIDR has reduced the issue of wasted address space in the routers. With CIDR, one entry in the routing table entry represents a combination of networks existing in the forward path. This network aggregation in a single address is known as Supernet.

CIDR IP addresses can be described as consisting of two groups of bits. The most significant group of bits denotes the prefix i.e., a network address that is used for the identification of a network or sub-network. The least significant group of bits is known as host identifier that determines the total number of bits in the address. It is used to signify the device on the work that will receive incoming information packets.

The total number of bits in this address is 28.

For example, a CIDR block is shown below

This IP address can be shown as below in the binary format:

Note that the network addresses that have the identical prefix and the same number of bits, always belong the same block. Also, the large and small blocks can be distinguished by the length of the prefix.

Let’ say that we have given a notation of /20 as the mask, how can we calculate the network mask

We can do this with the help of the below table notation.

For a mask of /20, the equivalent binary format would be as follows

From the third octet, e can see that there are 4 leading 1’s. This corresponds to the first 4 columns of our table

Calculating the Number of Subnets and Hosts

Now based on a CIDR block, let’s say we need to calculate the number of subnets and hosts possible. We can do this with the following equations.

So first let’s get the decimal format in place

Now, here the first 3 octets are dedicated to the Network

The first 4 bits of 1’s of the 4th octet is what gives us the possibility of the subnets. So the value of n is 4.

Next, we need to calculate the number of hosts

Since the number of host bits is 4, hence the value of n is also 4 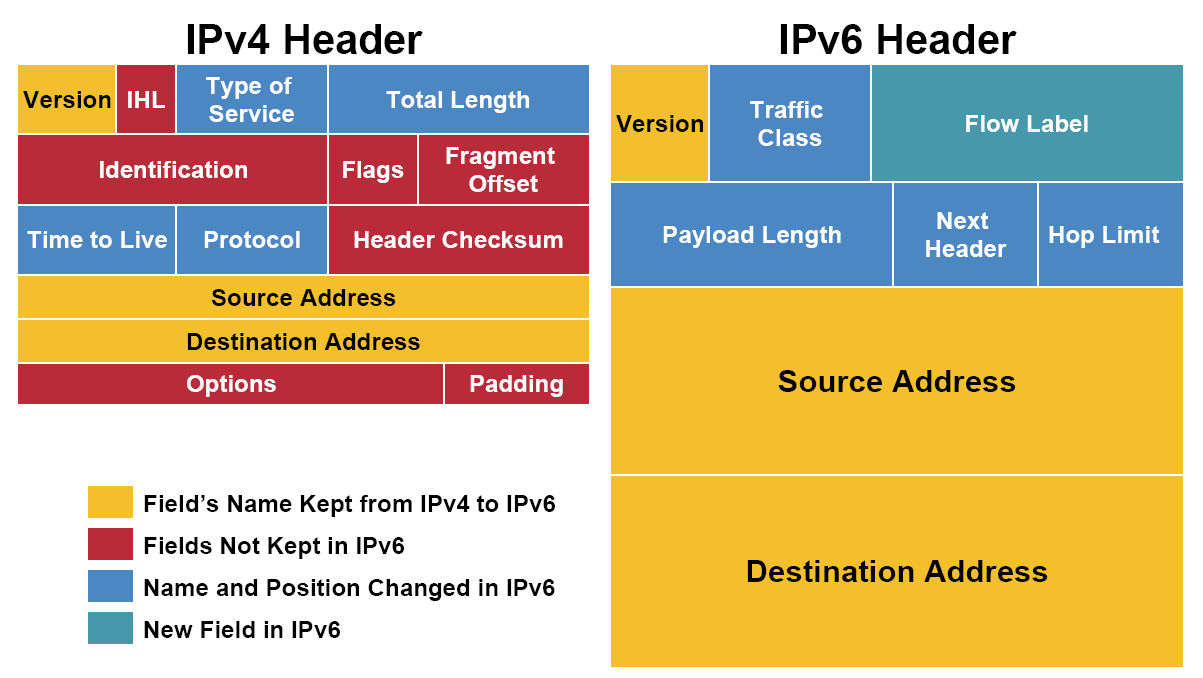 IPv4 is a protocol for use on packet-switched Link Layer networks (e.g. Ethernet). It is one of the core protocols of standards-based inter-networking methods on the Internet and was the first version deployed for production in the ARPANET in 1983. IPv4 uses 32-bit source and destination address fields which limit the address space to 4.3 billion addresses. This limitation stimulated the development of IPv6 in the 1990s.

IPv6 is more advanced and has better features compared to IPv4. It has the capability to provide an infinite number of addresses. It is replacing IPv4 to accommodate the growing number of networks worldwide and help solve the IP address exhaustion problem. IPv6 was developed by the Internet Engineering Task Force (IETF).

One of the main difference between IPv4 and IPv6 is their address space. As we already said the size of an address in IPv4 is 32-bits. Where IPv6 address fields are 128-bits.

These are the basic difference between IPv4 and IPv6.